The Osborne bull, guardian of the Spanish roads 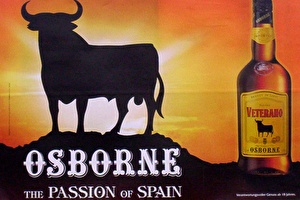 When you have visited Spain then you surely have seen the black bull signs that sits on hilltops and roadsides watching over the passing traffic. That’s the Osborne bull, Toro de Osborne. It is such an iconic feature that it is often confused with being Spain’s official brand.

In 1956 a campaign ad for the Veterano brandy of the Osborne sherry company was the source of the Osbourne Bull brand. An Andalusian artist suggested the bull and thus set a legend in motion. The birth of the Osborne bull provided Osborne with extraordinary international recognition and for years is one of the most recognized brands in the world and giving the entire country of Spain its symbol.

It started out as a wooden figure (4 meters high) but transformed in 1961 into metal in order to withstand weather conditions.

A law was passed in 1962 requiring that all advertising be 20 meters in distance from Spanish roadways. As a result, the iconic Osborne bull increased in size from 7 to 14 meters high. Years later, in 1974, another law required all advertising to be moved to a distance of 50 meters, so yet again the Osborne Bulls were moved further back.

In 1988 yet another law was passed prohibiting all advertising visible from the motorways and the surrounding areas. Following citizen-led social pressure, and opposition from artists and intellectuals, the Spanish supreme court issued an exemption in 1997 to the Osborne bull for, among other reasons, being integrated into the Spanish landscape. However, Osborne came up with a compromise. They would remove the Osborne lettering of the bull so only the bull shapes would remain. Of course by that time the symbol was already closely associated with the brand, making the letters more or less unnecessary.

So the bull lost its name but not his identity and its fame.

Guests of B&B Cortijo La Zapatera can visit one of these iconic bulls in the vicinity of Almayate. The bull overlooks Torre del Mar and the Almayate coastline.