A guide to ordering coffee in Spain 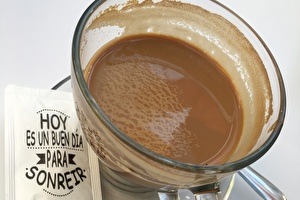 ‘Tomar un café’, ‘to have a coffee’ is a common expression and going for a coffee is part of the Spanish culture. There’s no wrong time to drink coffee in Spain. Almost every traditional bar will have an espresso machine and whether it’s 12pm or am they’ll be happy to serve you a cup. There are so many different varieties, degrees of strength and ways to drink it that Cortijo La Zapatera offers you this guide to ordering coffee in Spain.

The classic shot of espresso and also the most common way to drink coffee in Spain.

If the café solo isn’t doing it for you, get the double shot!

If the intensity of a café solo is a bit much, try a café Americano. This coffee contains the same amount of caffeine as a café solo but with more water, resulting in a milder flavour.

Literally translated as ‘a short one’, this is strong espresso shot, topped with a splash of hot milk. It’s great for an after-meal drink or an afternoon pick-me-up for those who find an espresso too bitter on its own.

Literally translated as ‘half and half’. As the name suggests, it's half coffee and half milk

The king of Spanish coffee is the café con leche. This coffee has equal parts of espresso and milk. This is the most popular form of coffee drink served in Spain, and you'll find a decent cup in most cafés and cafeterias.

It's no surprise that this drink is popular during the summer months, but you can usually order it year-round. You’ll get two glasses: one containing black espresso and another containing ice cubes. Simply pour the hot coffee into the glass with the ice and stir.

And there’s a coffee for winter time too, the carajillo. A small glass filled with espresso and shot of your favourite liquor. Typically it will be brandy, rum or whisky.

According to folk etymology, its origin dates to the times when Cuba was a Spanish province. The troops combined coffee with rum to give them courage (coraje in Spanish, which becomes corajillo).

Now you’re ready to explore Spain’s thousands of coffee shops! Try them and see what suits you best. Drink your coffee in a beautiful public square or a quaint café, using the time to catch up with friends and family. Don’t forget to drink slowly and linger at the table for as long as you want once you’ve finished.